The Beggar and Boldness

The Lord has been doing a lot of work with me lately on what it really means to be in community with others, and what it looks like to walk in boldness.

As I've been reading through the book of Acts with Bible Study Fellowship (BSF), I've been struck by one word the most: community. Especially in the church context, I think this word can be cliché and overused, but it is the building block of the early church.

I love that they devoted themselves to teaching, to the fellowship, to the breaking of bread, and to prayer. They delighted in being with each other, and with the Father. The call of Godly community is to walk with each other - to share our hearts with one another, and to be willing to be vulnerable - even when it's uncomfortable. Even when it would be easier to look the other way.

This past week, I spent a lot of time reading through Acts 3 with BSF. Peter and John are about to walk into the temple by the gate called Beautiful, but are stopped by a beggar asking for money. This man had been unable to walk since birth, and was placed by this gate each day to beg. At this point, I have to imagine that this beggar feels discouraged. Disappointed. Inadequate.

Peter and John asked the beggar to look at them, and I'm sure that this man is used to people doing the exact opposite - wanting to hurry by, not wanting to look at him, or simply just ignoring that he's there. Peter and John take the opportunity to have eye-to-eye contact with the man. And, the beggar, expecting money, must've been even more disappointed to hear Peter's response: "I don't have silver or gold, but what I do have, I give you: In the name of Jesus Christ of Nazareth, get up and walk!"

If I were this beggar, I have to be honest: I would've been really skeptical that what Peter and John were giving me was any better than my current situation. Peter didn't have earthly riches, like the beggar wanted; but he was confident in the work of the Holy Spirit and the name of Jesus. Peter knew that he didn't need the earthly riches to access a freely given gift. 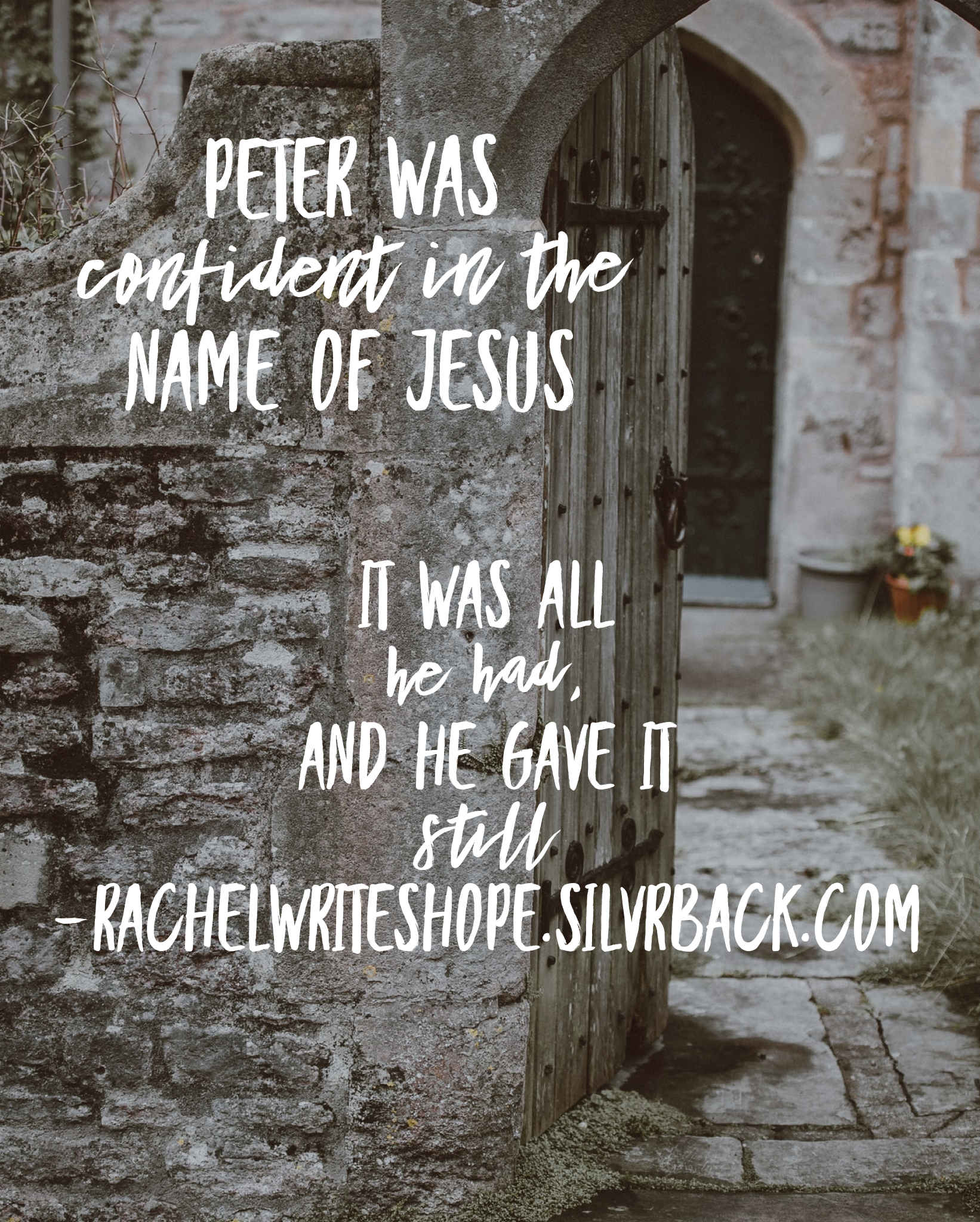 Acts 3:7 says, "Then, taking him by the right hand, he raised him up and at once his feet and ankles became strong."

Peter took the beggar's hand, raised him up, and THEN his feet and ankles became strong at once. This is another facet of the importance of community that is so richly weaved into the book of Acts. The beggar didn't jump up on his own - he chose to take Peter's hand and trust. Peter was confident in the name of Jesus; it was all he had, and he gave it still.

If Peter had money, he could've just thrown it at the beggar, and been on his way. It would've been easier, and less messy. It would've required no more than the obligatory head-nod, and feigned pity as the clanging of coins resounded in his ears. Empowered by the Holy Spirit, Peter saw the beggar's deepest need. Beyond the finite, material needs, Peter saw the deepest longing that this man truly had - healing. The beggar needed the help of community to step into the fullness of healing. When we partner with the Holy Spirit, we see transformation, and we become part of each other's stories.

If I'm honest, I was feeling very much like the beggar outside of the gate before he encountered Peter and John: inadequate and discouraged. The enemy likes to prey and pick on our deepest insecurities. I was choosing to throw a personal pity party and let the feelings of inadequacy stay, instead of taking my thoughts captive. In the midst of studying this chapter, the Lord let a revelation stoke a flame in my heart - He sees my deepest need, too!

If you find yourself feeling like the beggar outside of the gate today, know that the Father sees your innermost, deepest need. He's not going to walk past you, or pretend not to see you. In fact, Psalm 56:8 reminds us that He keeps track of our sorrows, and puts our tears in His bottle (NLT). In the same way that Peter and John stopped to notice and engage the man at the gate, the Father does the same thing with you. He invites you to look at Him, full in the face, and partners with you to walk in wholeness.

This update link alerts you to new Silvrback admin blog posts. A green bubble beside the link indicates a new post. Click the link to the admin blog and the bubble disappears.